Proust and the Squid: The Story and Science of the Reading Brain by Maryanne Wolf
My rating: 5 of 5 stars

Amazon.in Page
Time to get meta, and do some reading about reading. Wolf’s book explores the neuroscience of reading, the evolution of writing systems, and what keeps some children from learning to read as rapidly as most. If you’re wonder about the seemingly arcane title, Proust’s essay “On Reading” planted a seed of thought that would become this book. The squid bit reflects the aquatic creature’s famous neurological adaptability, which is also witnessed in the learning human brain. Reading as both a mystic experience and as the unanticipated consequence of an extremely plastic brain are among the book’s recurring themes.

Another recurring idea is that reading has a cost. This view was famously expressed by Socrates, who believed reading would contribute to diminished memory, intellectual laziness, and other problems. Wolf reflects upon Socrates’ criticisms, but also draws a parallel between Socrates’ ideas on the subject and the present-day argument that the internet / social media is driving us inexorably and inevitably toward an “Idiocracy” type world.

The parts of the book that deal with the neuroscience of reading do get a bit complicated. It would be hard for them not to as reading is a complex task unfolding within the most complex system that we know of. However, wouldn’t say that this book is any more dense or incomprehensible than most pop neuroscience books – especially as it’s mixed in with less challenging material.

My understanding of dyslexia (Ch. 7 & 8) grew considerably while reading this book. I learned that it isn’t a unitary affliction, but can come about at any of a number of cognitive tasks that have to transpire during reading.

If you’re interested in how humanity learned to read, the benefits and costs of this capacity, and what dyslexia really is, this book is definitely worth reading.

The Art of X-Ray Reading by Roy Peter Clark
My rating: 5 of 5 stars

Amazon.in Page
If one asks a group of people whether a story worked or not, one is likely to hear widespread agreement, but if one asks them why it worked [or didn’t,] one is likely to get a hodgepodge of murky conclusions. The average person will struggle to put together a coherent explanation for failed stories, an explanation which may or may not be grounded in paydirt. That’s because whether writing works or not is a matter of emotional resonance, and what delivers that emotional experience is almost as hidden as the pipes and wires in the walls that deliver water and electricity. Clark’s purpose with this book is to show the reader some of the characteristics they can read for, features which may not be readily apparent when one is lost in a good book, but which make the difference between a masterpiece and a ho-hum work.

While I referred to “story” a lot in the preceding paragraph, it’s worth noting that Clark’s book does cover the gambit of creative writing activities – including a few poets, essayists, non-fiction authors, and repeated references to one very famous playwright. That said, the bulk of the works under discussion are fiction — be it a novel, short story, epic poem, or play.

The book consists of twenty-five chapters, and the subtitle is a little bit deceptive because not all of the chapters take a single work as a focal point. Each of the chapters has a core concept to convey, using one or more authors (and one or more of each writer’s works) to do so. Some of these lessons are at the level of language, such as Nabokov’s playfully poetic alliteration and assonance, Hemingway’s sparse prose, or Toni Morrison’s effective use of repetition. Other chapters explore how intrigue can be set up and sustained: such as in Shirley Jackson’s foreshadowing of the twist in her story “The Lottery,” or the way “Sir Gawain and the Green Night” turns a non-event into unexpected chills, or how Harper Lee uses the slowed experience of time to build tension. Still other chapters present techniques such as placing texts within the text as done in “A Visit from the Goon Squad,” zooming in or out with perspective as is done in Homer’s “Odyssey,” or Shakespeare’s rejection of conventions in his sonnets. Some chapters investigate how a tone is established such as in Gabriel Garcia Marquez’s magical realism, and one other focuses on intertextuality – i.e. the borrowing of ideas from past masters in a non-plagiaristic sort of way.

The authors and works selected are popular and will generally be a least familiar to avid readers of English language literature, and most readers will have read at least a few of the works under consideration. A few of my personal favorites were explored including Shakespeare, Yeats, and Hemingway, and I suspect that will be true of most readers. There was only one author of whom I had no knowledge, M.F.K. Fisher, a writer who is well-known to mid-twentieth century cookbook fans, but who is a little obscure today. Having said that, I did come away with an interest in reading the book under discussion – i.e. “How to Cook a Wolf.”

While this book is marketed towards writers, I think any serious reader would find it an interesting and worthwhile read. If you want a better understanding of what succeeds in the world of writing, you should take a look at this book. 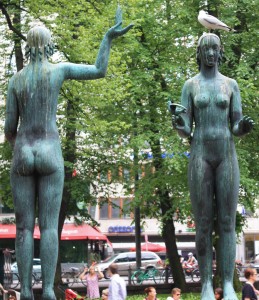 My Year End Review from GoodReads 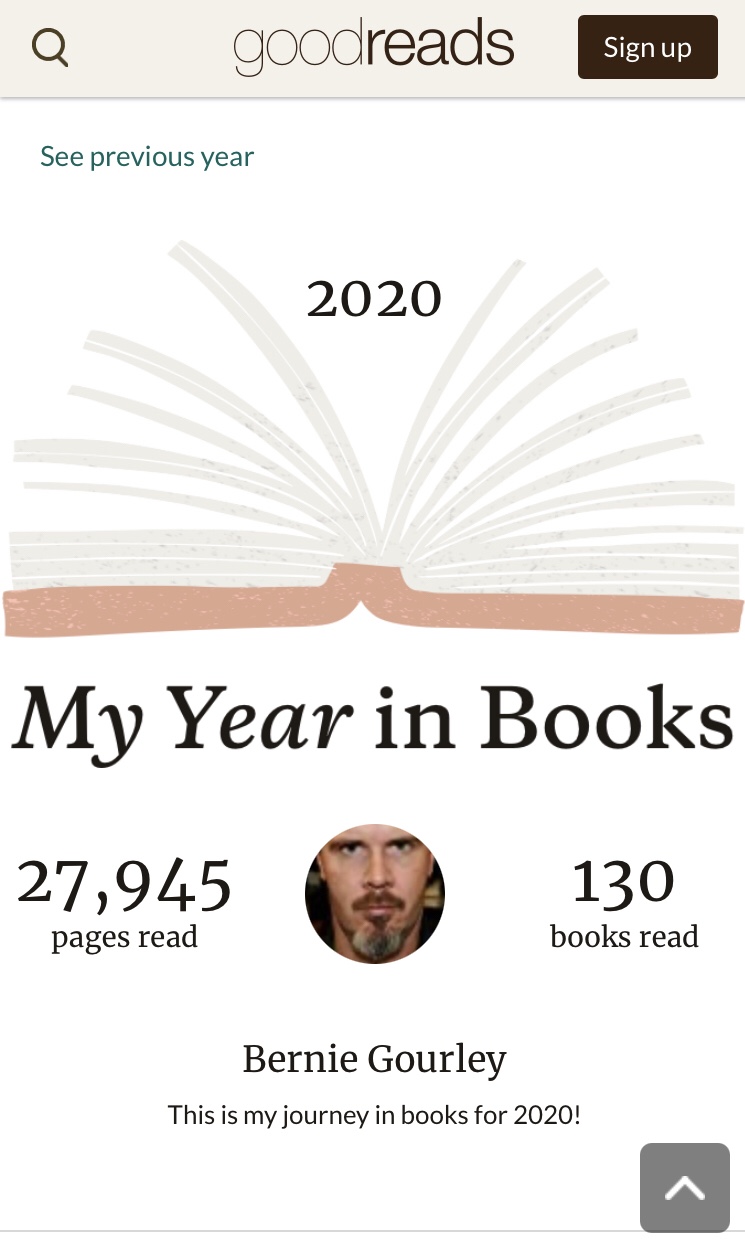 I’ve taken journeys by the page,
sitting before the Globe’s great stage,
trolling a knight’s tilt at windmills,
and seen where Grendel made his kills
to kick off a much greater rage.

I learned why birds sing in their cage,
and why the caged go on rampage,
while knights and knaves go quest for thrills.
I’ve read of roads…

I’ve spanned the Stone through the Space Age
while living too briefly to be sage,
I’ve moved by dogsled through the chill,
and opulently, with all the frills.
I’ve read of roads… 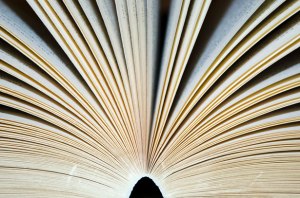 I donned this book like sunglasses
to tweak my old worldview,
but that intent was overshot
and I saw all anew.

I peered at the page and there saw
another universe.
Through eyes not mine, but no better —
nor in any way worse.

Eyes that’d seen things unknown to me,
but not this world of mine.
We’ll have to work together to
unravel space and time. 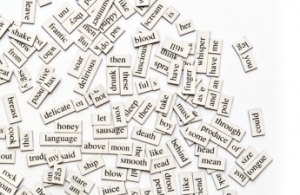 If you’ve never been incensed,
challenged, or nauseous —
your reading is too safe, puny,
and far, far too cautious.

Reading should be a courageous act
that threatens all you know.
It should shove your feet into shoes
far different from your own.

If you want your world unchanged,
T.V. is right for you.
Books will insist you be torn a-
part and rebuilt anew.

There are many philosophical novels in existence. However, many of them are difficult reads either because they are complex in language or concepts (e.g. “Thus Spoke Zarathustra” or “Faust“) or because — while readily understandable — they were badly in need of an editor (e.g. “Atlas Shrugged.”) Here are a few novels with interesting philosophical lessons that aren’t killers to read.

5.) Ishmael by Daniel Quinn: A man answers an ad that begins: “Teacher seeks pupil.” The teacher he discovers and the lessons he is taught aren’t what he bargained for. The book considers the impact of modern man versus aboriginal people, and the two groups’ respective place in the world.

4.) Brave New World by Aldous Huxley: In a futuristic world, people are controlled and manipulated by genetic engineering, classical conditioning, sleep-teaching, not to mention heaping helpings of drugs and promiscuity. The book considers the role of technology in humanity’s trajectory, and it contrasts Orwell’s bleak vision of dystopian governance with one that is every bit as manipulatory — if a great deal more pleasant in appearance.

3.) The Little Prince by Antoine de Saint-Exupéry: A young prince from a far-away land comes to Earth, and shows how wise the young can be and how absurd adults often are.

2.) Steppenwolf by Hermann Hesse: A man who feels out of step with humanity faces events that force him to reconsider what it means to be a man in the world of men.

1.) The Journeys of Socrates by Dan Millman: The prequel to Millman’s acclaimed book “The Way of the Peaceful Warrior.” It blends Eastern and Western philosophy in the training of a warrior.

5.) Nothing, and I mean nothing, gets stronger in the absence of adversity. If I told you that I had a strength building regime that would double your strength and you’d never be sore, you’d call bullshit. [I’m presuming that you’re not the proud owner of a Shake Weight.] Yet, somehow, people think they can build a stronger mind while consuming only information that confirms their existing worldview just because it, at best, offers a few additional scraps of information.

4.) Get a journey on the cheap. Reading outside your comfort zone not only exposes you to an unfamiliar world, it’s good preparation for traveling and the mental gymnastics that will be required of you. If you cannot handle the cognitive dissonance of reading something that challenges your existing worldview, you aren’t ready for traveling — stick with your AC bus tour group, or stay at home. [Yes, I’m distinguishing between being a tourist and a traveler. If you’re a traveler, you know exactly what I mean. If you don’t know the difference, you — my friend — are either a tourist or a homebody. Yes, furthermore, I’m aware of the irony of making a distinction between travelers and tourists in a post that is — in part — a critique of the proclivity to create separations between oneself and large portions of the rest of humanity.]

3.) Master your mind. If you get queasy reading a character perspective that is remote from your experience, or if you get livid reading views that radically depart from your own, that’s a good opportunity to step in and rewire your mind to be more agile and empathetic. A good place to start is by trying to adopt another’s perspective as a dispassionate observer. 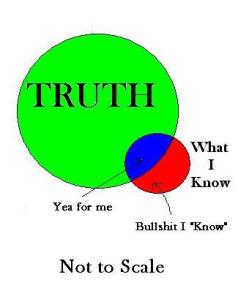 2.) Tear down some of the things you “know.”  I use the word “know” [in quote marks] to describe those beliefs you ascribe to with iron-clad certainty for no reason that would survive, say… lunch with Socrates. I’m not suggesting one should obliterate all of one’s beliefs, I’m just saying one should become aware of which articles of belief serve you and which do not.

For a few decades, I thought the path to a truer picture of the world involved adding to my stockpile of knowledge. However, I realized that some of what I knew was bullshit, and just adding to a stockpile of knowledge ballooned up the bullshit as well as the understanding of truth. So I needed away to tear down illusions. But how to do it? Turns out that beating one’s head with a frying pan destroys what one knows as well as what one “knows.” Furthermore, it turns out that reading outside my comfort zone has been key to helping separate the wheat of knowledge from the chaff.

1.) Be less predictable. Emerson said, “If I know your sect, I anticipate your argument.” He was a smart guy, and thought for himself.

Some books are wings,
lifting one up to see countless things.
Untethered, be your rise,
glimpsing vistas known to the wise.

Some books are blocks,
building up a reader’s bulwark box.
Barring ideas opposed
to a mind certain and closed.

Which books are which?
book’s soar = f (reader’s fears)