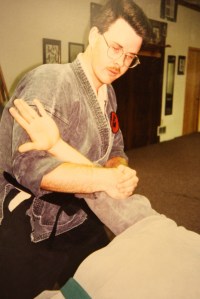 In the mid-1990’s training at the Bujinkan Indianapolis Dojo

The urge to learn martial arts first struck in my early teen years, but in rural Indiana there wasn’t much opportunity. When I was 18, I began attending seminars out-of-state, and joined a dōjō when I was first able in 1990–at age 20.

I studied only one lineage of old style Japanese martial arts for a couple of decades, but decided that I needed to see how others approached martial arts. In recent years I’ve learned a little tai chi chuan (mostly for health purposes), studied muaythai (completing the first couple levels of certification at the Muay Thai Institute), and began studying the Keralan martial art of kalaripayattu at the Kalari Academy in Bengaluru. Learning about these other arts–all very different in character and movement–has helped me improve my understanding of my own strengths, weaknesses, and vulnerabilities.

In September of 2014 training at the Muay Thai Institute