Learning third level material was when Kalaripayattu became daunting. Until then, it was just exhausting.

I’d been doing a lap of the kalari consisting of high kicks flowing into Hanumanasana (a scissors split.) Each split is on the opposite side from the last. By yoga standards, my split alignment was off. My hips weren’t perpendicular to my legs, but I’d allowed them to twist open to make the split easier. However, that was probably the least of my errors, and–unlike in yoga practice during which one might take minutes to ease into this intense split–the cadence in kalari was kick – split – struggle to one’s feet. [Okay, the “struggle” shouldn’t have been, but it’s an accurate description of my rendition.]

This wasn’t the hard part, by the way. I’ll get to that. The structure of the class up to that point was logically arranged to facilitate those splits. The practice started with warm ups of rapid repetitive motions that got the muscles and core warm. Then there were a series of kicking exercises that also served as dynamic stretches. Next, there was a vertical version of the splits done in a static form. With the inner edge of one’s bottom foot posted along the base board, the heel of one’s upper foot is slid up a piece of wood lathe worn smooth that has been tied vertically–perpendicularly to the steel burglar bars that one uses to pull oneself into the stretch. (This is an inner city kalari, and not the traditional version dug into the ground.) Then one revisits a high kick, swinging the leg with greater intensity. Only then does one do the lap of splits. 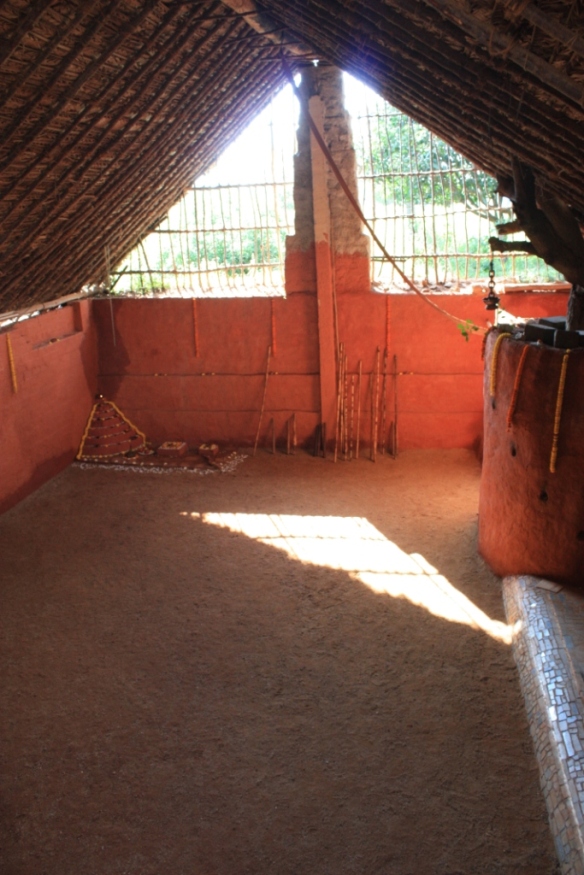 A traditional kalari looks like this. This is the Kalari Gurukulam in Chikkagubbi (parent school to the one at which I train.)

The next piece is where the third level kicked my butt. One’s hamstrings and quads stretched to the max, feeling more like limp noodles than coiled springs, one is now expected to work through a series of leaping maneuvers. There are seven leaping exercises (besides some basic warm-up leaps): a leaping circle kick, a spinning kick that takes one 360-degrees, a split kick in which one leaps up and kicks out laterally in both directions simultaneously, a split kick in which one leaps up spinning 360 degrees [theoretically] and does the same split kick in the middle, a flip kick in which one kicks up and forward and flips one’s body over in mid-air to come down on one’s hands and feet (in a lunged position with palms down next to the feet), and then there are two versions of leaping/spinning kicks that proceed down the length of the kalari.

Why does one do these plyometric techniques in the wake of such intense stretching? I suspect that experts in exercise science would tell me this isn’t the best way to improve my leaps. One should do the leaps when one’s muscles are more like rubber bands than al dente linguine. Still, I dutifully comply. Maybe there’s an ancient wisdom at work here. Maybe there’s not. There’s no way to find out without giving it a try. I fall down a number of times that first day, and on all subsequent sessions. As I write this, I’m now learning level five material, but I continue to revisit the leaps every session for two reasons. First, I’m not happy with my abilities. Second, I want to find out whether I can improve my balance of flexibility and power, and whether the kalari approach does the trick. (Note: I’m using the word “power” in the specific sense of work performed per unit time. In other words, it’s not synonymous with strength. It’s a function of both speed and strength.) At any rate, I still fall down.

However, looking beyond my own limited capacity to have my cake and eat it too (i.e. retain flexibility as I gain power), I see evidence of the success of this approach. There are a number of advanced people who’ve been using this approach for many years and have a preternatural balance of flexibility and jet propulsion. Said individuals seem to go from deep stretches to phenomenal vertical leaps without difficulty.

If nothing else, I’ve learned a great deal about my muscular composition. While I’m challenged by ballistic movements, my stamina is quite respectable. Type I (slow twitch) musculature seems to be disproportionately common in comparison to type II (fast twitch) in my body. While I’m including more power building training in my workouts, my progress is glacial. If I was smart, I’d take up long-distance running or some other endurance activity. But I tend to find such activities tedious, while I love the martial arts. And so I struggle. 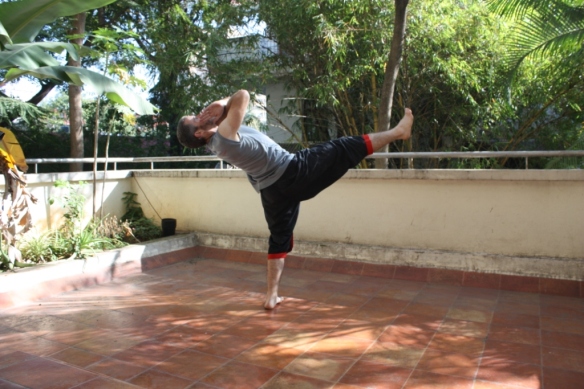 1 thought on “Flexibility & Power in Kalaripayattu: Confessions of a Gravitationally-Challenged Student”