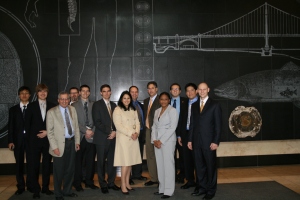 With the Sam Nunn Fellows at the National Research Council in Washington DC (I’m in the back row.)

I’m educated as a social scientist. I have Master of Science degrees in both Economics and International Affairs. For seven years I worked at Georgia Tech in a think tank that specialized in issues at the nexus of science, technology, and national security. I worked on a project called the Sam Nunn Security Program in which scientists and engineers were taught about the public policy process so that they could lend advice on complex, technical issues. I also worked with the Project on Strategic Stability Evaluation (POSSE), that considered whether strategic stability could be maintained as nuclear arsenals were reduced in size or relevance, and, if yes, how.

The cross-disciplinary set of interests I maintained largely fell under the heading of strategic interactions, where interactions are “strategic” if two or more parties have input into the outcome and optimal decision-making depends upon what other parties do. (Think of a game of chess. There is no best series of moves divorced from what the opposition does.) Risk, uncertainty, and gamesmanship are all central concepts here.

It’s this world where my most marketable skills lie.