a tiger on the prowl doesn’t reflect upon its tigerness

that’s what makes it feared and fearless

it doesn’t think it’s a tiger

it doesn’t know it’s a tiger

it certainly never wishes it was more tiger-like

What’s a tiger but a bright, orange cat

who naps all day but doesn’t get fat?

How does he stay muscled and lean

when he eats and eats and sleeps between?

Sure, now and again, he’ll chase a gazelle.

Unlike my cat, who’s trained me with a bell

to deliver food to a bowl right under her nose

lest I hear the pitiful yowl of hunger throes.

He picks slow and weak over fast and strong.

And you’ll never see him run in the mid-day sun,

and he’ll always be napping when his meal is done.

Taken in Fall of 2013 at Bannerghatta.

Bannerghatta has several tigers, two of which are white tigers, that can be seen on the “safari.” It’s not a safari in the usual sense, as the cats are in fenced off containment zones and segregated from their food. One rides in buses or jeeps in through a double-fenced gate, and then through the area.

At some point it occurs to you that they are in the larger area, with greater freedom of movement, and so in some sense one is on exhibit for the animals. The vehicle even has steel mesh over the windows to make the caging experience complete.  There are periodical camera portals to give one the illusion that it’s all for the humans’ entertainment.

There are several enclosures to keep lions, tigers, and bears separated.

I saw tigers looking, drinking, walking, stalking, and sniffing–but not crouching. I didn’t see a dragon, and so I must assume that it was hidden.

As with mean drunks, never interrupt a drinking tiger

I was working on a short story that involved a tiger attack, and–knowing almost nothing about the subject–I did a little research. I found some fascinating factoids. Here are some important tips to keep in mind in tiger country:

1.) Avoid squatting postures as it’s thought that many tiger attack victims are cases of mistaken identity. That is, sometimes an individual crouching to do his business or whatnot is mistaken for a tastier species. Apparently, tigers don’t realize that humans are the only creatures that wear clothing. Despite attempts by missionaries to educate tigers on biblical stories such as that of Adam and Eve, tigers continue to see themselves as god’s favorites.

2.) Avoid wearing leather, it makes you smell and taste like cow. While cows are sacred in India, tigers have denied receiving that memo. Or perhaps tigers are like members of PETA and are attacking those wearing animal hides to make a bold statement… but I doubt it.

4.) If one is attacked, don’t immediately counter-attack. Some tigers are just trying to express their passionate feelings on the subject of breakfast cereal, and one would not like a needless fight to ensue. One should only partake in needless fights when one has a good shot at winning– no offense to any one who has ever fought Manny Pacquiao.

5.) Don’t leave your dead out and about. Apparently, human is an acquired taste that tigers will find a fun exotic treat once they get used to it. We are the Rocky Mountain Oysters of the tiger world.

6.)  Be aware of your surroundings, and–as with Zombies–CARDIO-CARDIO-CARDIO. Tigers can run at speeds of up to 35 miles per hour (56km/hr.) for short bursts, but have the stamina of a pack-a-day smoker. If you can keep them from getting close to you, they’ll lose interest.

7.) Stay in the city. Tigers almost never go into the city because they tend to attract unwanted attention. The average tiger weighs about 400 pounds (180 kg.) and the orange and black stripe pattern that camouflages surprisingly well in wild sticks out everywhere except Paul Brown Stadium or the lingerie section of an inner-city K-Mart.

8.) If you are attacked, the tiger will leap up and put its fore paws on one’s shoulders to push one over onto one’s back so that the cat can leisurely crush one’s neck in his or her mouth. When the tiger rears up on its hind-legs you may either try a kick to the crotch or to engage the predator in a foxtrot. The former offers a 1 in 10,000,000 chance of success. The latter has never been tried before, and so no one can rightly speak to its likelihood of success, though it’s suggested that one not try to lead (You must recognize that–at that point– you are the tiger’s bitch.)

9.)  Because humans aren’t ideal tiger food but we are slow, weak, and are skilled in disciplines like “managerial analysis” rather than hunting or survival in the wild, man-eating tigers tend to be the old and infirm cats that find gazelle and antelope both too fast and jungle savvy. Because only the oldest of cats tend to attack, a sure strategy is to get your attacker talking about how things were back in his day and how the current generation of tigers are all misfits and hooligans.

10.)  If you’re attacked, make loud noises and violent “shooing” gestures with your arms. You’ll still be eaten, but you will appear quite brave on the video in comparison to those who go fetal and poo themselves.

Best wishes and be safe out there.

Taken at the Budapest Zoo

Two tigers circle in the night.
Neither eager to be first in fight.
Bellies low, they scrape the ground.
Each step pads without a sound.

One false step brings the pounce
of each fearsome muscled ounce.
They twist and writhe and snap,
each jaw a toothy, steely trap.

In the end one slinks away.
Both live on to later days.
A test upon the jungle floor
and each cat knows the final score. 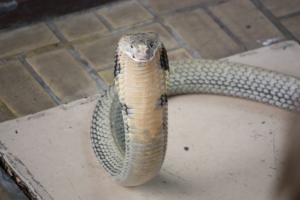 Once upon a day in February
ruminating about creatures scary
staring at a flaring cobra hood
I thought, maybe this serpent ‘s just misunderstood
I know its bad rap (wrap?) is Biblically-inspired,
but perhaps it’s time that rap be retired
if you stepped on me, I’d bite you too
well, perhaps not bite, but in the harshest tone bid you adieu

The crocodile has a snappy smile
and is always dressed in dapper style
if you evict him from his birthday suit
to suit your needs for some snazzy boots
I think we’ll all understand, if he claims as his your right hand
don’t think it’s  some vast assault on man
think of it as a reptilian guru teaching one Zen koan
and, to you, the sound of one hand clapping will be known
hint: it sounds like a bloodcurdling scream
and requires a readied surgical team

Taken at a “bear park” in Veresegyház, Hungary

Grizzly bears’ hairiness inspires scariness
but under that fur is the motive for wariness
it may look like rolly-polly flab
but bears have muscular six-pack abs
you think you’ve got him in your trap
but wonder how your spine just snapped
a minor miscalculation on the tranq front
and your life is liquids through a shunt
can you blame him, the trap ‘s a rusty, toothy maw
that you just caused to kill his paw