Space Shuttle Discovery; Taken on July 23, 2018 at the Udvar-Hazy Center of the National Air & Space Museum 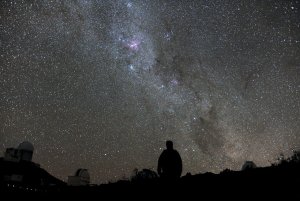 Let me step up on my soapbox,
tell you about a paradox.
Said a scientist named Fermi,
“Why’ve no aliens made the journey
to bring us a nice fruit basket
or just tell us how fantastic
it is having us in the neighborhood.”

Scientists have racked their brains
considering competing claims:
“Life is hard and smarts is harder.”
“They can’t stock a trans-galactic larder.”
“They’ve come here, but are to small to hear.”
“They are shy, out of wisdom or of fear.”
Or, simply, “They all blow’d themselves to hell.”

I, too, have had reason to ponder
why aliens stifled the urge to wander
into our little neck of the wood,
and I fear we don’t come off so good.
What if, I ask you, heaven forbid
they think of us as the smelly kid?
Are we the seatmate who won’t shut up
about his robotic barbershop startup?
Do humans come across as the kind
to ask a stranger if they wouldn’t mind,
helping us move and antique armoire
or lending us their new flying car?

So when considering whether we’re alone of device or luck,
consider the competing hypothesis that we really suck.

That speck of sand
that you can barely see
is a planet to the particle
that sits on either side of it,

[though it’s half a life time for muonium.]


Such a tiny window
through which to seek
the sum of all knowledge.