Taken in the Annapurna Sanctuary in May of 2018

FUN w/ FLAGS FACT: Nepal’s is the only non-quadrilateral national flag. A fact that is much less fun for the Foreign Ministry / State Department minions who have to find a way to fly it.

Escape From Kathmandu by Kim Stanley Robinson
My rating: 5 of 5 stars

This is an oldy-but-a-goody. It was originally published in 1989, though I read a 2000 edition that I bought in Pokhara. Nepal is probably the only place one is likely to find this book on the shelves of a bookstore (other than used book sellers.) If you didn’t get your copy in Nepal (or haven’t been to the Himalaya) the one thing you need to know to admire the quirkiness of this book is that the grandiosity of what you experience in the Himalaya makes lost cities (ala, Shangri-La) or lost species (ala, the Yeti) seem less unlikely than you would ordinarily think them.

This isn’t so much a novel in the sense of a work with a single narrative arc as it is a novel-in-stories that consists of four adventure stories featuring the same lead characters — George Fergusson and George “Freds” Fredricks — some overlapping minor characters, and all of them set somewhere within Nepal. The cross-cutting theme of these stories is that of trying to rescue the magic of Nepal (dusty and dilapidated as it can sometimes be) from modernity and the grasping hands thereof. The point-of-view character varies from one story to the next (though not within stories.) The setting criss-crosses Nepal from Everest to Chitwan forest to ill-defined border areas, but always going back to — or cutting through — Kathmandu.

The titular first story of the book is about an attempt to rescue a Yeti that has been captured and taken King Kong style back to civilization by way of Kathmandu. The second adventure presents a race to hide the body of a famous deceased climber before it can be found and plundered by individuals who would like to take it from Nepal to make their names from the investigation of it (or, possibly, the novelty of it.) [You may or may not be aware that the bodies of most of the people who’ve died climbing Everest remain up there – often buried in snow and ice but, occasionally, exposed.] The penultimate story is about trying to save Shangri-La by stopping a road that is to be built too close to it for comfort. The final adventure imagines that there are ancient of tunnels under Nepal and centered in Kathmandu. In this story, the conflict between the old and modernity is brought to a head is a most challenging way by the fact that the threat to the secret, ancient tunnels is a badly needed sewer system for Kathmandu. While in the first three stories, the reader readily knows who to root for, in this last story, he or she is hung on the horns of a dilemma.

I enjoyed this book tremendously. It’s humorous. The two Georges (though one conveniently goes by the name “Freds”) offer a classic odd couple dynamic. The stories and characters are quirky, but the book still manages to hang on to its theme and lessons. I’d highly recommend this book for those who like humorous adventure stories.

Taken May of 2018 in Kathmandu 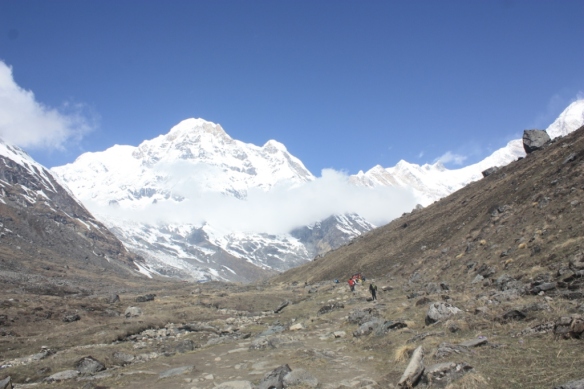 Taken in May of 2018 in the Annapurna Sanctuary

In Kathmandu, if you’re having tooth pain, you can nail a coin to the root knot of a special tree to request the analgesic intercession of the gods.

Taken in May of 2018 at Annapurna Base Camp 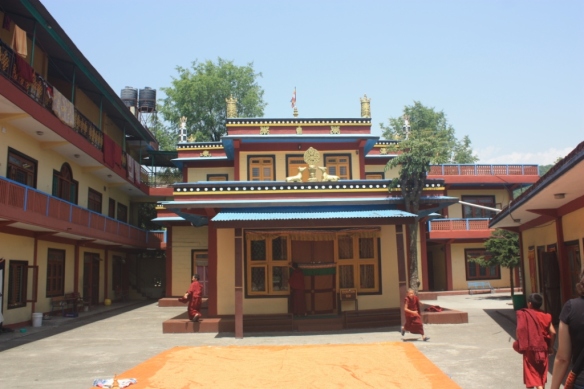 Taken in May of 2018 at the Tibetan Village near Pokhara