The Lost City of the Monkey God: A True Story by Douglas Preston
My rating: 5 of 5 stars

Preston tells the story of his participation in an expedition into the Mosquitia region of Honduras in search of a lost city, alternately called the White City (i.e. La Ciudad Blanca) or the City of the Monkey God. Preston was acting as a correspondent for National Geographic and was part of a larger team including a photographer, filmmakers, archaeologists, and a team of ex-Spec Ops escorts. It’s not a simple and straightforward tale of Indiana Jones types chasing after the artifacts of a long collapsed civilization (though it does capitalize on that sense of intrigue greatly from the title to the telling of both the historic and contemporary searches for this fabled lost city.) The book tells several stories that occur about and around this search, and they are arguably more interesting.

One of these side stories is the historic accounts of past explorers who searched for the White City. Those were the individuals who more closely corresponded to Indiana Jones–both because they didn’t have an airplane with a state-of-the-art Lidar system (lidar is the light/laser version of radar or sonar), and because they were more likely to engage in tomb-raiding and artifact robbery. This isn’t to say that the expedition that Preston was on didn’t have its share of snakes, quickmud, and other hazards that are the only reason that a huge city from a past civilization would remain undiscovered in the present day. The region in which the expedition took place had not only all the natural hazards of dense jungle, but the human hazards posed by operating in territory controlled by drug cartels. That said, they didn’t have to machete through hundreds of miles of jungle with no idea of where they were likely to find their objective.

One of the most interesting side stories occurred when Preston and many of the members of the expedition came down with leishmaniasis, a nasty tropical disease vectored by sandflies. The disease has a treatment that’s almost as likely to kill one as is the disease. It’s almost impossible to completely get rid of the disease. One can be cured in the sense of being made asymptomatic, but one may remain a potential carrier waiting to be bitten again and to pass the nasty parasite onto another sandfly so they can infect someone else. There are several elements of the disease story that are intriguing. The most interesting is speculation about the role that disease might have played in the sudden evacuation of this lost city. This is informed by a broader discussion of how “Old World” diseases spread through the “New World” with crippling effect. Another is how diseases are neglected when they almost exclusively infect poor and rural people (until a National Geographic correspondent tracks it back to the continental US, that is.)

For those outside of archaeology, one of the least interesting, but still interesting, side stories is that of the intense controversy in the field. Preston is very forthcoming about his talks with scholars who were angered and outraged by the use of terms like “Lost City” which hearken back to a period in which tomb-raiding was the norm and Westerners stole and shipped priceless artifacts back to the West by the ton. These internecine wars of academia reinforce the idea that this isn’t just musty history, but involves questions that many people feel intensely passionate about.

There is a photo section that provides images of both the cast of highly discussed people and a few of the artifacts uncovered. There’s also a section of sources and citations.

I found this book to be fascinating and I’d highly recommend it. Those interested in exploration and adventure tales will find it of obvious interest, but those with a curiosity about public health may find it unexpectedly of interest.

Taken at Ramanagara in May of 2014

I’m standing in the foreground for scale, and even if I were only 10 inches tall (I’m not) that would be a pretty grandiose Hanuman.

Taken at a distance. Surveying all. 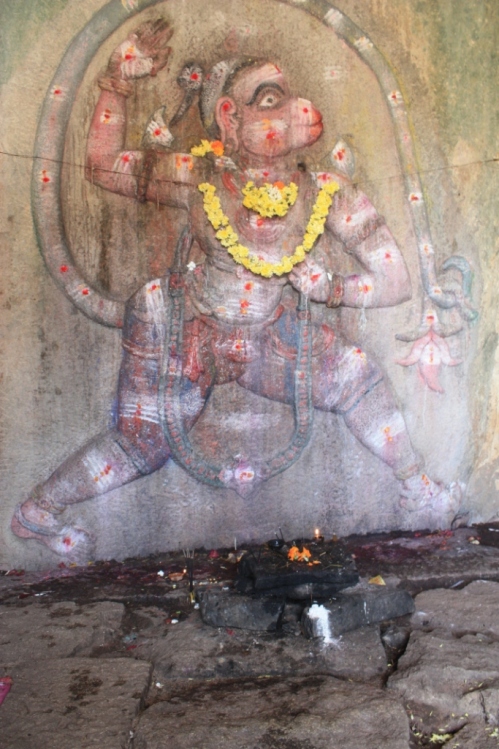 Among the many devotees of this Hindu deity are wrestlers, who admire the monkey-god for his reputed strength. In Rama’s war against Ravana, he was said to have picked up a mountain and carried it a great distance, which is pretty strong.

He’s not whimsical and mischievous like Sun Wukong, the Taoist monkey-king (who also has god-like powers), but some believe that Sun Wukong’s myth was partially influenced by Hanuman’s myth. (Of course, the more irreverent and anti-authoritarian Taoists had a different take than the caste-conscious Hindus. (Whimsicality and mischievousness are considered more virtuous among the former than the latter.)

This Hanuman temple is a small, stone-block affair abutting a giant boulder on the trail from Hampi Bazaar to Achyutaraya temple. As you can see, it still has local devotees.