I love books that send one down the rabbit hole. Here are a few of my favorites. [Note: as I was putting this post together, I realized that I’d left out Philip K. Dick entirely. That is a glaring oversight as almost any of his books could make this list, but I’m too lazy to make a bigger list right now, so you’ll have to wait for Part II.]

5.) The Unlimited Dream Company by J.G. Ballard: A man crashes a small aircraft into the Thames, and after struggling up from the wreckage he discovers he can’t leave the town of Shepperton — though he can do just about anything else he likes.

4.) The Lathe of Heaven by Ursala K. Le Guin: George Orr believes his dreams shape reality. At first, he’s taken for a crazy man, but then his therapist begins to wonder. 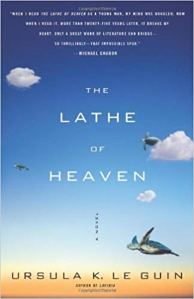 3.) Hard-Boiled Wonderland and the End of the World by Haruki Murakami: A man hired for his skill at using his mind as an unbreakable encryption device, finds out that the job that seemed too good to be true, was.

2.) The Master and Margarita by Mikhail Bulgakov: The devil comes to Moscow with his  rogue’s gallery, throws the city into disarray, and it’s all tied to a novel based on the life of Pontius Pilate.

1.) Alice in Wonderland  & Through the Looking Glass by Lewis Carroll: Tumbling down a rabbit hole or walking through a mirror, Alice is transported to a whimsical land where everything is strange and exhilarating.

Let me know of any oversights [besides the aforementioned PKD.]

The Lathe of Heaven by Ursula K. Le Guin
My rating: 5 of 5 stars

This book’s lead character, George Orr, runs afoul of the law for borrowing the prescription cards of friends and acquaintances. But Orr isn’t a run-of-the-mill junky out to get prescription painkillers. Instead, he’s taking medications to keep from dreaming, because Orr’s dreams change reality—sometimes in subtle, and sometimes in drastic, ways. Of course, the world would be chaotic if the dreams only changed the present, but they also retroactively change the past to be consistent with the new present. Orr is the only one who remembers both the new and old timelines, but he’s not happy with these god-like powers–especially given the chaotic and unpredictable possibilities that arise from the subconscious mind. Not unexpectedly, Orr is reluctant to tell anyone this because they will think he’s mad.

Orr gets assigned to voluntary therapy with a psychologist who specializes in sleep disorders. Orr tells Dr. William Haber about his unique condition, but, once the doctor recognizes Orr is telling the truth, Haber draws the opposite conclusion from Orr. Haber thinks that Orr should be using his “power” to make the world a better place, rather than being scared of it and trying to avoid it. Haber presents the classic example of good intentions gone awry. While the doctor does use the hypnotically induced sessions to improve his own career situation, the worst outcomes result from the doctor’s attempts to help Orr (without Orr’s approval or prior knowledge) to improve the world. The law of unintended consequences is ever-present, and the dreams guided by Haber often result in “out of the frying pan and into the fire” situations.

This is an interesting premise in a highly readable book. The contrast between Orr and Haber reflects a broader societal tension between those who think they can engineer a utopian future and those who think that one’s attempts will always blow up in ways that one can’t anticipate. It should be noted that the title comes from “The Book of Chuang Tzu” and the virtue of “wu-wei” or “actionless action” in contrast to the corresponding vice of trying to manhandle the world into a desired state is central to the story.

I enjoyed this book. It’s a short novel with a clear theme that is thought-provoking. I’d recommend the book for fiction readers, and highly recommend it for readers of sci-fi and speculative fiction.