I recently finished the course requirements for Registered Children’s Yoga Teacher (RCYT) training at a1000 Yoga in Bangalore. (As of this writing, I still have a kid-specific teaching requirement to meet before I can add this to my Yoga Alliance certification portfolio.)  When I did my seva (charitable teaching) requirement for RYT-200 at an orphanage, I discovered that teaching kids was a different monster. That’s what led me to take up this specialization, and I thought I’d share some of what I learned. 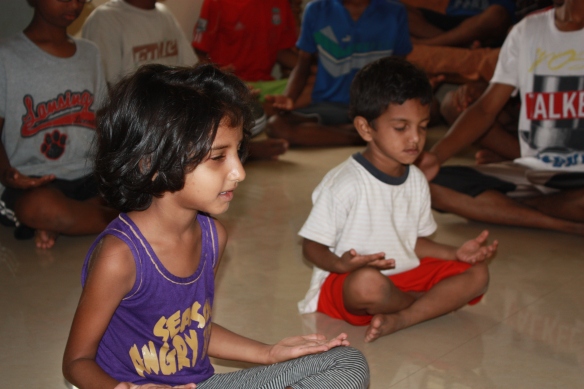 1. Eight is [soon] enough:  The traditional age for introducing children to a practice of yoga is eight. This doesn’t mean that kids aren’t taught postures (asana) or other yogic techniques earlier, but for younger kids it’s typically done as play. Traditionally, surya namaskara (sun salutation), nadi shodhana (alternate nostril breathing), and Gayatri mantra (a particular chant) serve as the core of the child’s practice.

Why eight? It has to do with a number of physical and mental development factors including lung development, the state of the pineal gland, and the arrival of abstract reasoning capacity. 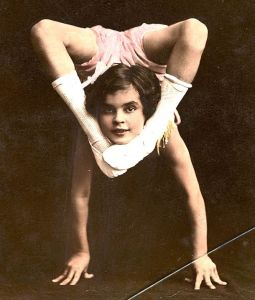 2.) There are no youth-related contraindicated postures: I expected to spend a fair amount of the course learning what postures one shouldn’t teach children and why. However, instead we were told that kids could be exposed to any Hatha yoga postures.

Of course, this is predicated on: a.) the fact that one is dealing with a child eight and up; b.) one recognizes that the strengths and weaknesses of children will need to be taken into account and modifications or capacity building may be necessary in some cases. (For example, the flexibility of kids may allow them to achieve postures that few adults can, but at the same time their lack of strength and balance may be limiting factors for some postures.); c.) obviously, one needs to take into account that kids may have contraindicated conditions that aren’t age-related but are due to their particular physical condition.

It should also be noted that children are typically not taught breath retention (khumbaka) as part of their (breath exercise) practice. So it’s not true to say that there are no contraindicated practices.

3.) In stillness, your results may vary: One of the nice things about a yoga practice for kids is that it acknowledges that most kids, by nature, don’t want to be still. As opposed to mainstream education, which attempts to force stillness upon them, yoga offers a mixture of activity and stillness. However, it was interesting to see the range of abilities to remain motionless during yoganidra (“yoga sleep,” i.e. a hypnogogic state) practice. There is, of course, an age component to this. That is, young kids have a harder time staying still than older kids. However, that isn’t all there is to it. A few of the older kids couldn’t stay still in savasana (corpse pose) for five seconds, but a few of the young seemed able to be still for as long as required–not necessarily awake, but still.

4.) Balance isn’t in a child’s wheelhouse:  I knew that strength was ill-developed in prepubescent children, but I didn’t realize how challenging kids would find even simple balance postures. They’re a little like drunks in this regard.

Obviously, kids tend to be freakishly bendy, and so it’s not a surprise that most of them could learn to do chakrasana (wheel pose, i.e. a full back bridge) from a standing position in short order. In fact, the challenge for those who had one was more likely to be confidence with not falling on one’s head than with a lack of back-bending flexibility.

The moral of the story is that one must recognize that children are a little like senior citizens in this one domain. That is, consideration must be given to the risk that they will fall down during balancing poses. Unlike seniors, they don’t have too far to fall, and they’ll heal lickety-split if they do, but–still–they’ll fall like a drunken sailor.

5.) Teaching kids’ partner yoga requires a different approach:  The usual advice is that one should teach kids from “inside the circle.” That is, one shouldn’t set oneself off at the head of a class like one would usually do with an adult class. One sits with with the kids and does the class with them. (You probably won’t be doing 6 classes a day that way.)

I had the opportunity to teach a pairs yoga class and found that an entirely different approach was needed. First let me say that pairs (partner) yoga is a great approach for teaching kids. Many kids will enjoy the interaction, and they can learn about teamwork and (in some cases) take advantage of the stabilization of additional limbs / grounded surface area. However, because it requires so much attention to be focused on the partner, it’s best not to teach it from inside the circle. One won’t necessarily be able to see what one’s students are doing, and that can be dangerous.

6.) There’s a yoga for special needs children: Among our guest speakers, we had a yoga teacher from Prafull Oorja, which is an organization that teaches special needs children using yoga, dance, and various other methods. These approaches are used to increase bodily awareness, which is a common problem across many different afflictions. We learned about the range of challenges faced by such children and how the usual approach is varied to adapt to their needs.

The course included information about several non-yogic methods that could be used to complement yoga practice to achieve the objectives of a yoga course. I write this by way of explanation as to why the last few lessons seem to have little to do with yoga.

7.) Stories must be physical, animated, and repetitive for small kids:  These features serve to help adjust to the child’s limited vocabulary, while helping them to build vocabulary. We had a speaker from Kathalaya (House of Stories) who offered a great deal of insight into story-telling for kids.

Lest one think that story-telling is just filler in the yoga context, I’ve been learning a great deal about how our minds need stories, and am inclined to believe that one’s insight into the mind will be limited if one doesn’t understand story and why stories appeal to our minds. I recommend the book Wired for Story by Lisa Cron.

8.) Games used in theater can go hand-in-hand with yoga practice:  I was completely new to the idea of theater games before this course, but we had someone teach us a number of these games, and the logic behind building our own. Games which aren’t too cerebral can go help build some of the same skills that are sought in a course of yoga. Such games include practices that help develop one’s voice and physical expressiveness. These games can also help bring some kids out of their shells so that they are more ready to actively participate in a yoga class.

9.) We need mental hygiene as much as dental hygiene: This actually comes from a quote by Sir Bat Khalsa, a Harvard Neurologist who studies the effects of yoga. When I was doing research for my final presentation, I ran across said quote, which goes:

“There’s no preventive maintenance. We know how to prevent cavities. But we don’t teach children how to be resilient, how to cope with stress on a daily basis… We’ve done dental hygiene but not mental hygiene.” 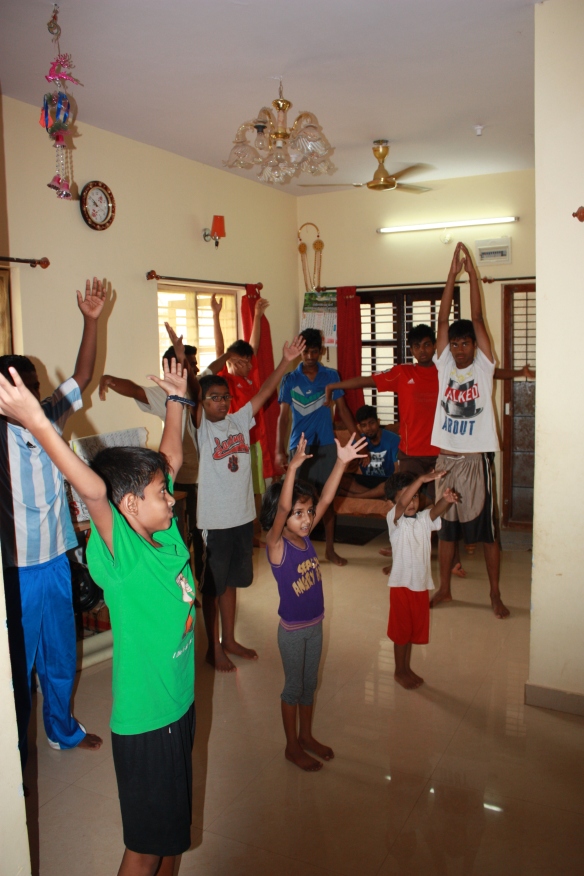