Taken in May of 2017 in Khonoma Village

Wealthy villagers in Nagaland earn merit by constructing circular stages like this one on which festival activities can be conducted. (Or, during non-festival times, grain can be put out to dry as per this photo.)  I put “Town Square” in quotes because they are neither square in shape nor are they solitary centrally-located public spaces. Rather there can be several of them– as there are in Khonoma, a village near Kohima — at various locations in and around the village. The little cubic pillars are seats, some of which may be assigned to prominent individuals and others are open seating.

The basket put upside-down on the pillar is typical of the region, and is worn with the band across one’s forehead.

The building in the back is also a public building constructed by a prominent villager.

Taken in April of 2017 in Khonoma, Nagaland 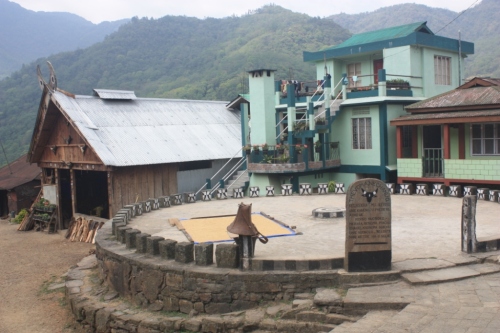 A few of these circles are located throughout the village in front of the properties of wealthy villagers who made merit through acts of charity. They are used to get together during festivals (or for drying rice as seen above.) Some of the seats are reserved for village elders and others are free for first-come-first-served. 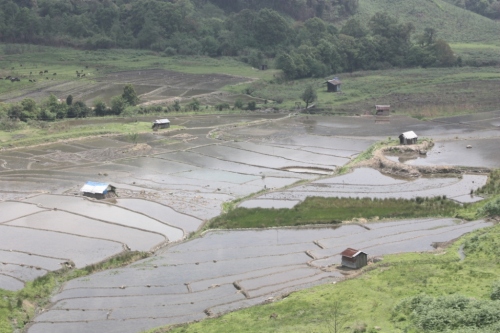 Taken in May of 2017 in Dzuleke Village

Taken in April of 2017 in Nagaland

Nagaland feels like a country unto itself. Not like Myanmar (which it’s not.)  But, also not like India (which it is, technically and legally.)  Neighboring  Assam and Manipur feel like India with a Tribal twist, but not Nagaland. It feels Tribal to its core.

Among the factors that contributes to this is that almost 90 % (88.1%) of it’s population is Christian. For some reason, the missionaries found this piece of the planet fertile ground. Buddhism has no presence in Nagaland at all, which is one of the things that makes it seem quite different from the SE Asian countries, which it bears a resemblance to in a number of ways (e.g. racially, architecturally, etc.)

But religion is just part of it. If you were to go by attire or what music is playing in the cafe (K-pop, US pop, and local music inspired by the aforementioned) one would be more likely to guess one was in Southeast Asia. And if you were to go by cuisine, you’d have no idea where you were. It’s not remotely like Indian cuisine except that the favored snacks are those of Ladakh and Sikkim [i.e. Tibet-esque; momos and noodle soup.] Still, it’s not like SE Asian cuisine excepting that steamed rice is a part of every meal and the pungent smell of fermented yam leaves (anishi) is a smell similar an odor I’ve encountered in Thailand. (But I see no reference yam leaves in Thai cuisine, so I suspect in Thailand its something else that’s fermented to create said smell.) 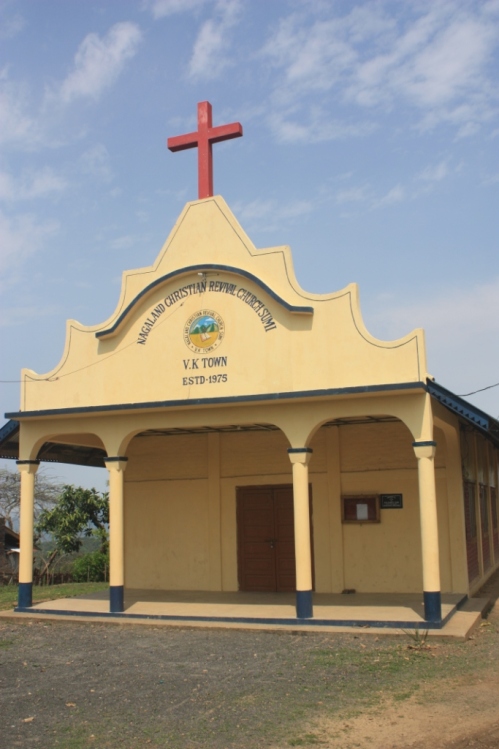 Taken in May of 2017 in Khonoma, Nagaland

This is actually Dzuleke Village, the next village down from Khonoma.