Taken in February of 2014 in Bangalore. 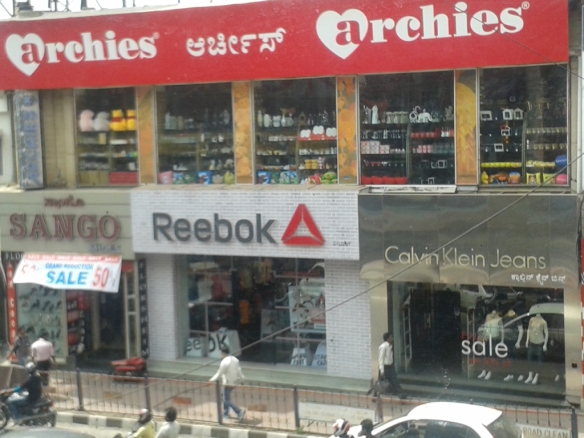 This is a section of Brigade Road in Bangalore–one of the city’s retail districts.

Fun fact: in India–for reasons I don’t know–franchisors don’t exercise control over or coordinate the locations of their stores. For this reason, one may have two Reebok stores in a given block and five within walking distance. It’s actually not unlike Waffle House is (or, perhaps, used to be) in the Atlanta metro area where one might have Waffle Houses catty-corner from each other. Usually, a company or franchisor wants to control the density of stores so that they don’t cannibalize each other out of business and leave their more disciplined competitors to snatch up market share.

If I had to guess why this seems to work here, I would say it has to do with high density of wealth and low labor cost for retailers. There are–in absolute terms–a lot of people in the city with disposable income but they are concentrated in certain areas so it doesn’t make as much sense to spread out your stores. Plus, with low labor costs, the price of keeping a store up is relatively low. Of course, it may have nothing to do with either of those issues, but rather be rooted in India’s bizarre regulatory environment.