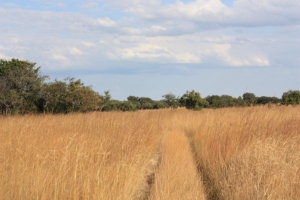 The bleeding beast crawls into the tall grass. It shakes those shafts of tall grass, but the erratic waggle is lost in the wind shimmy.

The wounded creature seeks its hiding place like a manic kid chooses one during hide-n-go-seek. It’s not so much about never being found as it is about achieving maximum impact upon one’s reveal.

The kid wants to cause a gasp — maybe a dot where his victim peed himself, a tiny bit.

The beast wants the hunter’s knees to buckle, dropping him to the ground where he’ll try to butt-scoot away, either having dropped his rifle or holding it with such strained white-knuckle intensity that it’s of no use.

That way the beast can use its final burst of strength to lunge onto the hunter, using its bodyweight to pin him to the ground, so it can work him over like a fighter who’s got his opponent on the ropes.

I’ve been told that Cape Buffalo is the worst beast to have to follow into the elephant grass. Its bovine nature belies the savagery of its Death throes. It will not stop until either: it’s physically unable to move; or, there is no solid material left of the hunter’s body (whichever comes first.)

For those of us who never go beyond following uninjured bunnies into knee-high grass, it’s impossible to know what it’s like to track a wounded animal into the tall grass.

2 thoughts on “POEM: Wounded Beasts and Where They Find You [Prose Poem]”