5.) Take a class / Join a group: While I’m partial to yoga and the martial arts, the class could be in any area that presents a challenge.  However, there are a couple of advantages to the aforementioned two (to which I would add dance.)

First, these disciplines train one to be expressive with one’s body and to move more freely. This can do wonders for confidence. People store tension in their bodies without even realizing it. Many have postural problems that effect confidence and self-perception.  A 2014 New Zealand study found that posture can have a strong effect on emotional state.

Second, no matter who one is, one will be challenged by new approaches to movement.  The average person has great difficulty learning to use their body in new ways. One needs to drill in movements conscientiously to achieve competency. Our conscious mind, frequently gets in the way. Even the most athletic and coordinated people will need to work it, failing repeatedly until they succeed.

Why is the challenge so important? Many people go through life afraid to fail, but far too few fear never failing. Sounds idiotic. Nobody wants to fail. I have some hard news. If you’ve never failed, it’s not because you are unmitigatedly awesome in all things. It’s because you’re living in a box and cherry-picking life experiences that feel unthreatening.

If, like me, you’re an introvert, this approach offers the additional benefit of social interaction that is of a predictable / schedulable nature. One needs the interaction, but the problem comes when one has social interactions and / or sensory stimulation that go on too long and in an unpredictable fashion. Therefore, being able to schedule such time is a good way to go about being a more productive introvert.

4.) Writing  / Visualization:  These two approaches to mentally rehearsing allow one to keep one’s inner critic in check. The problem with simply day-dreaming it is that critic can chirp in without being that cognizant of it. 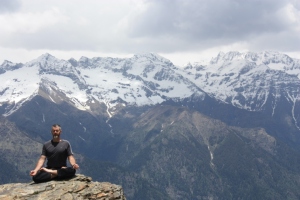 In visualization, one quiets the mind and can then non-judgmentally acknowledge and dismiss the negative thoughts. In writing–be it as a journal entry, poem, or a story–we may not notice the nagging voice of the inner critic on the first draft, but you can take note of it and undo it in rewrites.

3.) Travel / Living abroad: I should point out that not just any old travel will have the desired effect. Many people plan their travel with the objective of being comfortable at the fore.  They eat at places that serve the same kind of food as at home. They stay in hotels with virtually all of the comforts of home, and sometimes many more. This is understandable because the traveler might just be seeking rest.  However, if one is seeking the epiphany or enlightenment experiences talked of by backpackers and ashram-dwellers, that’s not something that comes from staying in resorts or eating at American fast food joint. Those kinds of brain changing experiences come when one is stripped from the familiar and has to surrender one’s attachments to the way one thinks the world should be. One’s perception of culture and worldview changes radically when immersed in a foreign environment.

2.) Game it / Roleplay: There’s a big movement to gamify all manner of everyday activities.  In her book, “Reality is Broken,” scholar of game design Jane McGonigal describes a game called “Chore Wars” that incentivizes the doing of mundane household chores.

What is it about games that help one move beyond one’s limits? First of all, it incentivizes actions. And if you’ve ever noticed people playing games on their phone or FB for hours on end, you’ll note that it doesn’t take much reward to keep people plugging away—as long as the game is structured well.

Second, good games provide a built-in process of “leveling up.” This means that the challenge keeps being intensified as our skill level advances. Those familiar with Csikszentmihalyi’s conception of “Flow” will recognize that matching skill level to challenge level is one of the most crucial elements in facilitating flow-state.

Roleplaying is a bit like the previously mentioned tools of visualization and gaming in that it’s a way to have a low-cost rehearsal. If one has someone with whom one can engage in such a roleplay, than one also has someone to help make you aware of your inner critic and its deleterious effects. And that brings us to the final tool:

1.) Have a spouse, partner, and or confidant: In “Why Zebras Don’t Get Ulcers” Robert Sapolsky tells a story of being interviewed by a magazine. He was asked what the number one thing that they could tell their readers about reducing stress.  To which he replied that the most well-established factor in stress reduction is to have a spouse / life partner with whom to share one’s challenges.  Unfortunately, this was a magazine for women business leaders, a significant portion of whom had given up on permanent relationships and families. They, therefore, asked him what else he had.  Still it’s hard to overlook the anxiety-fighting effects of having someone around with whom to share one’s dread.