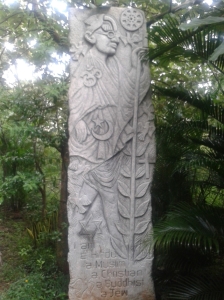 Indian cities don’t whisper. They are often lovely, always lively, but offer little relief from bombardment of the senses. Horns are relentless. Bus and truck air-horns can make a person jump from one’s skin. The smells may be pleasing or putrid, but they’re never faint. There is sign pollution, wherein it’s often impossible to find what one is looking for in the sea of signage–even when it lies right in front of one’s face. Colors pop and glow, not smooth pastels, but oranges and purples that you can practically taste.

It shouldn’t have surprised me when I got to the southern edge of the city to find one of the major land uses was Ashrams. Ashrams in all shapes and sizes, from the small but authentic Narayana Gurukula (mentioned a few DAILY PHOTO installments back) to the massive Art of Living International Center–headed by Bangalore’s most famous guru, Sri Sri Ravi Shankar. Out Kanakapura Road, where monkeys sling through trees and fields of corn remind me of my own Hoosier upbringing, lies a diverse collection of houses of spirituality and reflection. They offer a much-needed island of tranquility amid a sea of chaos.

I stayed for nine nights at one of the most singular of these ashrams, Fireflies. One way in which it’s unique is that it’s a “guruless” ashram. That may seem oxymoronic. The terms “guru” and “ashram” seem to go hand in hand. Guru means teacher. My dictionary defines ashram as, “the home of a small community of Hindus.” [I think this definition could be challenged both on the necessity of “smallness” and “Hindu-ness.” As indicated, there are some pretty massive ashrams and there are ones that are associated with non-aligned spiritual groups.] It’s true that the typical ashram has a spiritual leader or yogi as its head. At Fireflies the gurus come and go with the groups that visit. While I was there, besides our group of Thai Yoga Bodywork practitioners, there was a group of psychotherapists and an organization of past life regressionists. Rather than housing a single unified set of beliefs, at this ashram a diverse and sometimes conflicting set of beliefs are harmoniously housed.

As I have little experience with ashrams, I can’t speak authoritatively about other differences. However, it’s my understanding that one other difference between Fireflies and many–more typical–ashrams is that the latter often have limited or non-existent staff. This means that the visitors may do much, if not the bulk, of the work. Fireflies has a staff that does the cooking and takes care of many needs of the visitors. This isn’t to suggest that it’s like a hotel stay. There’s somewhat of an expectation that visitors will take care of the things that they can do for themselves, and the accommodations are basic.

I found the experience of my stay to be beneficial, if not always stress-free. The main source of my stress had little to do with the Ashram. I received my phone sim card right before I left. After a couple of days I got my phone working for a day or two only to have the phone company turn it off because no one was home when they randomly dropped by to verify my address. [Showing up unannounced in the middle of the day and then treating you as non-existent if no one is home is one of the annoying little hallmarks of Indian institutions (corporate and government) that I’ve experienced on more than one occasion.] I will admit that it is a mark of both society’s and my own wussification that we can’t go a few days without being in contact with home and news of the world. Twenty years ago no one would have expected to have such constant verification that all was well in the world. People could go days back then without worrying that the sky was falling. While it wasn’t pleasant to be cut off, it was an eye-opening experience. [I will note that the Ashram property is on a slope and at the low end I got no reception at all, but on the high end I’d get a bar or two–enough to do the job if the phone company wasn’t screwing me over.]

It was also useful to go without brain candy for a while–that is without television and related entertainment. Part of what I hoped to learn from my stay was whether I was prepared to take the 10-day Vipassana meditation course in the spring. The Vipassana course is considerably more spartan level of existence than that of Fireflies.

On some levels, I proved ready, and on others I have yet to do so. I did just fine eating two vegetarian meals and a snack for dinner each day. (I could have had three full meals per day, but I wanted to make sure I was ready to cut my intake adequately. Therefore, I stuck with a snack in the evening and ate reasonable portions for breakfast and lunch.) I found the meals at Fireflies to be quite good, and I had no complaints in that regard. It should be noted that the ashram is not an easy walk to any restaurants or substantial stores (there are a couple small shops up on the corner, but they’re geared toward locals and don’t necessarily have what a traveler needs) so it’s not easy to go out for something–though I did see one auto-rickshaw around the premises at times.

The true test of preparation for the Vipassana course is that there are no books or notebooks allowed. This will be my greatest challenge. I finished two novels and two nonfiction books on Kindle during my stay, plus probably another 100 pages of other books, and I filled 2/3rds of a journal–mostly with notes from the TYB workshop.

Also, at the Vipassana meditation course one is not allowed to speak to anyone but the instructor at a specific time when they take questions about the course. I wasn’t nearly so cut off from humanity at Fireflies. The workshop participants and teachers were around all day and I had occasional conversations in the evening with others at the ashram. Furthermore, I’m a fairly solitary creature.

It was interesting that during the weekends there were so many people around, but during the middle of the week there were few. For a while I thought I was the only non-staff member person at the ashram—though I later found that to be incorrect.

So my time at the ashram was Spartan, but that’s part of the beauty of it.

I should point out that there are some impressive stone carvings located throughout the property. The artists are international in scope. Each of these carvings or sculptures offers its own story. I’ll attach a few pics for your edification.