It’s May and this is the fifth installment tracking my investigations into the mind and altered states of consciousness. [I’ll post links to the preceding entries at the bottom.]

This month I’ve been spending time wearing an EEG [electroencephalogram] headset, and watching my brainwaves [or graphs of them, to be more precise.] In many science and / or children’s museums today, you may see a ball game that employs an EEG headset. My wife and I saw one last year at Chicago’s Museum of Science and Industry [one of my favorite museums.] Like most ball games, the goal is to drive the ball into the opponent’s goal, but there’s a twist. The twist is that the ball moves forward for the player whose mind is most calm, rather than the one who is “trying hardest.”  This twist often makes for an amusing turn of events in which a player who is about to score gets so excited that he finds the ball being swept back toward his own goal.

Therein lies the challenge of an EEG headset — observation changes outcome. While there are many apps to choose from, two of the most common are: a.) apps that show one’s brainwave conditions in the moment; b.) apps that record one’s brainwaves over a period of time. (There are variations and combinations of the above — not to mention scaled-down games like the one mentioned in the previous paragraph. One app that I intend to try allows one to video oneself carrying out an activity (I’d like to try it with taiji or yoga practices) with measures of focus and relaxation shown on the recording. However, I’ve not yet worked with said app, and so will have to write about that experience at some later date.)

At any rate, there are trade-offs with the two approaches that I mentioned. With “a,” becoming more analytically minded changes your result. With “b,” it’s hard to make a connection between experience and brainwave state because one will be trying to do so after the fact (and the more one engages in the conscious thought needed to allow one to remember the flow of one’s experience, the less one will be in a meditative mindset.) Having mentioned this, it’s also a beauty of the practice. One has to keep from letting one’s mind respond to the lights, colors, and changing shapes, and just take in gross level feedback without being highly responsive or analytical about it.

Below is a picture from an app that shows one instant’s real-time brainwave conditions. 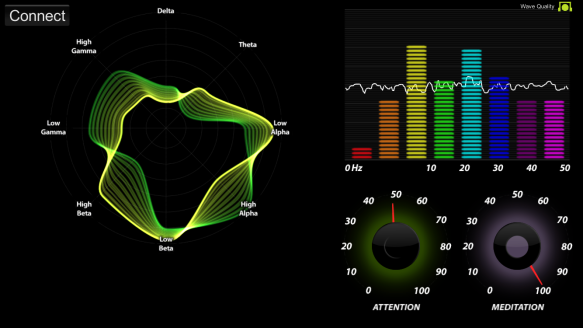 As one can see, the visualizer gives one both bar-graph and spider-graph representations of the relative make up of one’s brainwaves at a given instant. Neurosky divides the brainwaves into eight categories:

[Note: While the order and approximate values are agreed upon by all, one may see different numbers for cut-offs in Hertz. I chose at random from among the numbers I saw. It should further be noted that the descriptions are rough, and it’s not always known exactly what causes a particular brainwave state.]

One will also note the two dials in the lower right corner. These show one one’s state of attention / focus (left) and relaxation / meditative consciousness (right.) These two scales aren’t strict trade-offs. One can be high on both scales, simultaneously. However, if one is super-intense about focusing then the relaxation score will drop, and it won’t be easy to be attentive and extremely relaxed. I’d say going up to about 80 on both scales simultaneously isn’t unusual, but I don’t believe that I’ve had both scales maxed out [except when the headset first comes on and there’s a brief period of weirdness before it settles into normal operations.]

Here is a snapshot with a more focused state of mind. 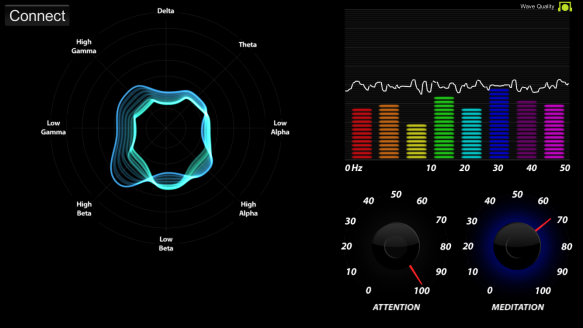 I’ve found this practice to be beneficial. I often do my pranayama (breathing exercise) and meditative practices lately while wearing the headset. It will be interesting to see if I can get it working with moving practices. (The headset is sensitive to physical movement, and so I’m not sure how well contact will be kept during movement — even for slow practices like taiji.)

Below is a pic of me modeling the headset. (No, that’s not the facial expression with which I meditate.) I’ve been working with the Neurosky Mindwave Mobile 2. I sometimes have trouble getting it up and running, but once it’s operating, I haven’t had any problem with the unit at all. A friend has the Muse, and he also has had trouble getting his settled on his head and started; so that may be a universal difficulty. Some people complain about the Neurosky being uncomfortable, but I haven’t found it so. (Though I think they fixed some of those problems with the current model.)

Next month, I’ll be experimenting with some breathing practices (Holotropic breathing / Tibetan Tummo) that are said to lead to altered states of consciousness on occasion.