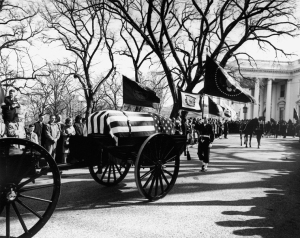 Presidents live the ultimate catch-22, the only way to reliably boost their approval ratings is to shuffle off this mortal coil (i.e.become worm food.)  The more decomposed a president, the more fond our remembrances of him. The worst thing that anyone ever says about a long dead president is nothing at all. When was the last time you heard a scathing character impeachment of Millard Fillmore? (I do realize that a person with the supreme narcissism needed to be president may find silence more insufferable than being called the son of a syphilitic donkey whore.)

(Quick, without looking, name a president from the 19th century other than Jefferson or Lincoln [or Fillmore]?) FYI- there were 23 or 24 of them. If you drank your entire cup of coffee before you could come up with one of the other twenty names, congratulations you are a typical American– or an exceptional non-American.

I first noticed this phenomena when watching the Reagan funeral. Everyone from all walks of life had great things to say about our 40th president on that day. However, while I was still a minor at the time, I distinctly remember half of the country loathing the man spectacularly and engaging in ad hominem attacks against him at any opportunity. Well there was one period during which no one was saying horrible things about Reagan’s character and that was  during the brief period after the assassination attempt when his opponents thought he might die — at which point they went into dead presidents mode. Had Reagan passed away at the hands of John Hinckley, he would’ve achieved a level of freedom from being crapped upon usually reserved for a our first few (long decomposed) presidents.

Still, Reagan has achieved the broadly beloved status of being the Democrat’s “In-your-face President” just like Kennedy serves in that role for Republicans. An “In-your-face President” is one that political parties use to attempt to show that their current opposition is on the lunatic fringe by indicating that that iconic leader supported something vaguely, roughly approximal in a similar sort of way to what they are trying to do in the present day. These statements being followed by a silent, but understood, “IN YO’ FACE.”

I’m sure that when Carter dies, equally lovely things will be said about him — though never has a bigger train wreck of state been seen then the term of James Earl Carter. To be fair, some of the wheels that rolled off the RV-of-state were not his fault, but we  give all the credit and all the blame to the president. Why do you think Clinton is always grinning like he just had sex? No, it’s not because he just had sex– though he did (the speaking circuit is like fishing with dynamite), it’s because he reigned over the big bubbly part of the bubble. When we were rich because we thought we had a lot of valuable stuff, before anyone bothered to look inside and see what we had was rotten at the core.

Admittedly, Nixon’s demise did challenge everybody’s ability to grin and say nice things.  Comments were made such as, “That Checkers was a good boy, such a good boy, yes he WAS… YES he WAS. Oh yeah, and how about that China thing, that was a real work of diplomacy.”  (Checkers was one of Nixon’s dogs, made famous by a Vice Presidential speech of the same name.) The word “China” was used at Nixon’s funeral more than it was used at the Chinese Conference on China in Beijing, China. Of course, there wasn’t much nice to say about Nixon. Democrats can’t even take advantage of the fact that the Environmental Protection Agency (EPA) was a Nixon Administration initiative. Nixon can’t be an “In-your-face President.” It’s too much like slapping your opponent with a bloated dead fish; you may hit them, but you’re going to get the stink on you never-the-less.

1 thought on “Our Most Beloved and Most Deadest of Presidents”