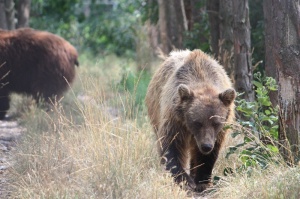 There once was a bear named Jerry,
and – like the nursery rhyme Mary –
Jerry Bear was quite contrary.

“Those salmon should not swim upstream.”
“The people I bite should not scream.”
“Why wreck good berries with whip cream?”

There wasn’t a thing anyone said
upon which Jerry would not tread.
Don’t be like Jerry. He’s a d!$%head.