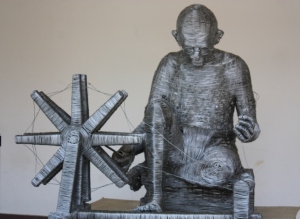 Gandhi is credited with saying, “Be the change you wish to see in the world.”

That’s powerful phrasing. It’s much more effective than, say: “Nag your friends until they’re the change you desire.” It’s also far more potent than: “Write your legislator to draft a new bill so that we all have to be the change you wish to see.”

That’s why it sticks in the mind. I once read an entire book by a well-known billionaire who made his fortune in foreign currency arbitrage. I was underwhelmed by the book and the character of the author, and don’t even remember the title because I remember thinking the title should have been: “Why It Should Be Illegal to do What I Did.” This individual came to believe it was morally repugnant to upset the economies of entire nations to make a quick buck, but the lure of making that buck was too great for him to stop without the threat that someone would put him in jail for it. In other words, instead of living by the motto of “be the change,” he lived  by the motto of “If I don’t do it, someone else will.”

1 thought on “TODAY’S RANDOM THOUGHT: Be the Change”