Banned Books Week runs from September 23 to 29 in 2018, offering a nice reminder about all of the books that are so awesome that some doofus doesn’t want you to read them.

Here are five of my favorites: 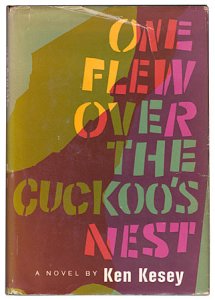 5.) One Flew Over the Cuckoo’s Nest by Ken Kesey: Randle McMurphy conducts a con to convince authorities that he’s insane and belongs in an asylum rather than doing hard time in a prison. It’s a commentary on how free-spirits are viewed by society and the pressures put upon them to conform. It’s been challenged many times on the usual grounds of sex and language, as well as for the “glorification of criminal activity.”

4.) A Clockwork Orange by Anthony Burgess: In a dystopian England, the head of a small band of thuggish teenagers is imprisoned and convinced to undergo operant conditioning that will make any future attempts to engage in violent behavior personally painful. The book is a critique on social engineering, though it should be pointed out that there are two different versions of the book in circulation, one with the final chapter written by the author and one without it, and the inclusion or deletion of that chapter has serious implications for the book’s message. Instances of sex and violence are the usual basis for challenges to this novel.

3.) The Satanic Verses by Salman Rushdie: Two men fall from a plane and survive, one archangel and one demon. The title of the book, and much of its controversy, is owed to a plot point about the Islamic prophet Muhammad (Mahound, in the book) receiving both angelic and demonic guidance and prophecy. This is the most explicitly banned book on the list with at least a dozen countries explicitly banning it — most of them were Islamic countries offended by the portrayal of events when Islam was first coming into existence, but a few banned it out of public safety fears over extremist activity. The author is under Fatwa, religious approval of Rushie’s execution, by Iranian authorities.

2.) Brave New World by Aldous Huxley: In this soft dystopia, people are kept in line by readily available drugs and promiscuous sex. Among the American Library Association (ALA) list of challenges to this book was one suggesting the book be banned because it: “makes [promiscuous] sex look like fun.” Which made me laugh a little.

1.) The Grapes of Wrath by John Steinbeck: A family, bankrupted by the one-two punch of the Dust Bowl and Great Depression, packs up and heads out to the promised land of California, only to discover that it wasn’t all that it promised. Objection to language is the most prevalent cause for challenges to this book.

2 thoughts on “5 of my Favorite Banned / Challenged Classics”