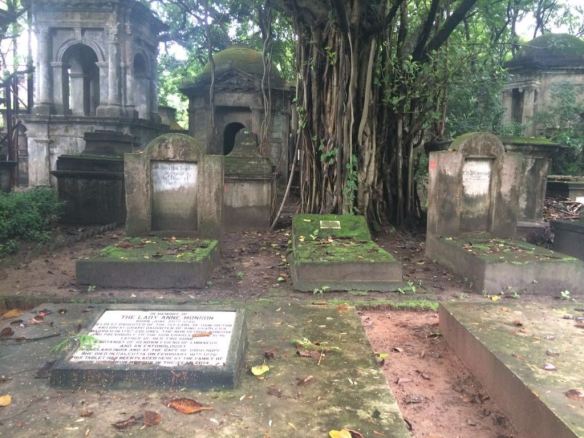 Walking through this cemetery, which dates to the late 18th and early 19th centuries, was a trip. I didn’t realize that there was an entire scale of grandiosity between your run-of-the-mill cemetery and places like the Ming Tombs or the Pyramids at Giza. While there were a few normal-sized monuments (as seen in the picture below, tombs under a banyan tree), most of the mausoleums were gigantic.

It would be interesting to know what led to this trend at that time. I know these were all wealthy British gentry, but, still. Possibly because the mausoleums were so huge, the cemetery filled up in a narrow time span. (i.e. Most of the tombs I saw were dated in the first decade of the 1800’s, but there were some from the late 1700’s as well.) It’s like the occupants learned of the Pyramids and were like, “I’ll be damned if some Pharaoh is going to outdo me.”